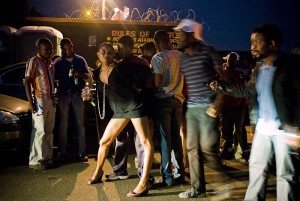 Project Location
The history of Soweto (South Western Townships of Johannesburg, South Africa), started when Africans had been drawn to work in the gold mines that were established after 1886 but was propelled by the increasing eviction of Africans by city and state authorities during the Apartheid era. Soweto has since grown into 32 townships, now formally part of the city of Johannesburg.

“Deep Soweto – A Mosaic of Life”  by Marc Peschke for LFI

“It was here, on June 16, 1976, that the country witnessed an uprising against plans to enforce Afrikaans, the language of the Boers, as the national language for education. The resistance was violently subdued by the police. Hundreds of people were murdered. But a lot has changed since then – In South Africa and in Soweto. Dutch photographer Edward van Herk’s series titled ‘Deep Soweto’ shows this clearly. The work was commissioned by the Molapo Cultural Center in Soweto. In an area measuring little more than 100 square kilometers, Soweto is home to 4 million. And the contrasts couldn’t be more extreme, with illegal immigrants squatting in corrugated iron huts next to wealthy home owners, while the middle class continues to reside in so-called matchbox houses – tiny four-room dwellings without bathrooms, built during the Apartheid era. However, the picture is evolving. New houses, schools, hospitals, shopping malls, kindergartens are popping up everywhere, streets are being tarmacked, electricity and water pipes laid down. There are new bus connections leading into town, and the University of Johannesburg also has a campus in the townships – and still Soweto continues to be a place with towering unemployment rates and few white people. Van Herk’s series is mostly dedicated to the life in the streets: the turbulent bustle of the squares and markets, the nightlife, the builders and craftspeople, the countless citizens doing their best to improve their lot. There’s a feeling of poverty blended with an optimistic sense of new beginnings in the air. Soweto unquestionably sees a lot of misery – but also music, dancing, exuberance, fashion, community living, small businesses, a relaxed atmosphere, culture and history. The photographer brings all of this across in a remarkably unpretentious, yet precise manner. The 32 districts of Soweto together make up a mosaic of life, with auto repair garages on one street and hairdressers and billiard tables on another. People train at boxing clubs or on football pitches, lifting weights and skipping ropes. Kids hang out on street corners listening to explosive South African hip hop and staring into the camera with casual pride. Van Herk’s pictures speak of confidence. The autodidact, born in 1973, first began taking pictures after the tragic death of his young son. ” I had to start looking at things with new eyes,” he says. ” Photography gives my curiosity a chance to find expression. I would probably describe my style as ‘humane reportage’. The greatest gift I have received through my work is the connection with the people I have met. I dedicate ‘Deep Soweto’ to its proud people.” Van Herk named his series after a local hip hop group called ‘Deep Soweto Crew’. The name endows his photos with meaning as the project takes a profound look at life in Soweto.

Artist statement
During my first visit to Soweto I felt a strong vibe present, a buzzing spirit celebrating the unique culture, heritage and history of struggle despite of the hardship due to poverty and AIDS. I developed a strong desire to get deep inside and connect to these people and discover the essence of their being. The cycle of life and death is omnipresent in this community and this made me feel alive in return. The spirit of Soweto embraced me. During my visit in 2009 I got threatened at gunpoint, beaten and stabbed for my belongings by young individuals on glue. It felt as a huge setback. The scars tell my fiends and peers a different story than the one I was so passionately propagating. There is good and bad everywhere, there is no truth in photographs, this work is just a reflection of my point of view. My feelings reflect a people full of energy and pride and it was my intention to visualize this. Although a lot has changed in Soweto since the end of the Apartheid era, more needs to be done to bring eduction, libraries and books to future generations. Louis Mahlangu has a dream to create a library in his Molapo Cultural Center. His dream is to bring books to the children of Molapo.